Hepatocellular carcinoma (HCC) is a tumor whose incidence is rising, but whose prognosis remains poor.  Most of the patients are diagnosed when they have already several lesions in the liver. These multiple lesions visible or not visible radiologically are of major significance in terms of prognosis and also of treatment options.  Most of the patients are at the time of diagnosis not candidate for surgery and are proposed for local treatments such as transarterial chemoemboli-sation (TACE) or radiofrequency thermal ablation (RFTA). Local treatments lead to a geographically limited destruction of the liver and elicit a regenerative response from the remaining liver. This response comprehends the secretion of growth factors which will stimulate not only the normal liver cells but also the tumor cells. We hypothesized that RFTA could either promote or inhibit the growth of rest tumors. This project aims at understanding the effects of RFTA on distant liver tumors. 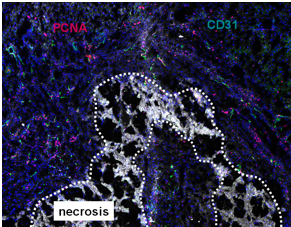 Microscopy of the necrotic RFA area with staining of proliferating cells (PCNA) and blood vessels (CD31).

Epidemiological studies have assessed the association between obesity/ type 2 diabetes (T2DM) and cancer in large populations and documented positive linear trends in death-rates with increasing body-mass-index for various gastrointestinal cancers including liver. Non-alcoholic fatty liver disease frequently occurs in the context of obesity, insulin resistance and type 2 diabetes and is increasingly recognized in industrialized countries worldwide. There is strong evidence of obesity-related disorders as risk factors for hepatocellular carcinoma and of nonalcoholic fatty liver disease (NAFLD) as a cause of hepatocellular carcinoma. As the liver is the central organ for the detoxification of numerous endo- and xenobiotics such as bile acids and food carcinogens, the overall purpose of this study is to clarify the influence of hepatic transporter dysfunction during the metabolic syndrome and its impact on intra- and extrahepatic tumorigenesis. Previous studies from our group have demonstrated that hepatobiliary transport is impaired in several animal models of fatty liver disease and metabolic syndrome. Both, bile acids and food carcinogens have been shown to activate pro-tumorigenic signaling pathways such as PTEN/PKB/Akt in liver cells. We hypothesize that retention of bile acids and food carcinogens by hepatic ABC transporter dysfunction occurs in fatty livers and contributes to an increased incidence of intra- and extrahepatic malignancies by activating these cancer pathways and DNA adduct formation.

Biomarkers for early diagnosis and outcome prediction in hepatocellular carcinoma 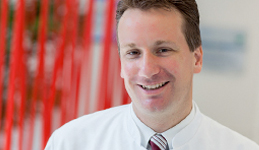